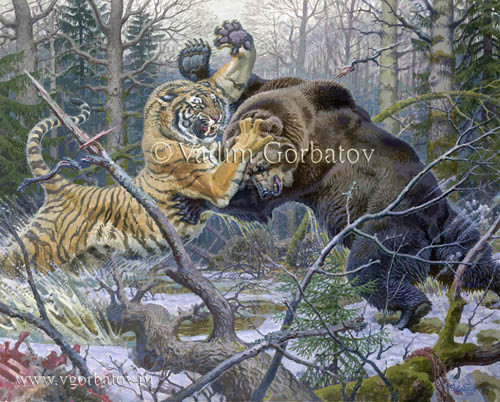 The picture “Battle” is finished – the fight of a tiger with a bear.

However, it is finished – this does not mean that the artist will no longer touch it. It is quite possible that some details will still change. Because while Vadim Gorbatov was writing it, and the first sketches were made two years ago, he received a lot of comments from his friends, zoologists and photographers, about the anatomy, biology, as well as the behavior of these two largest predators during the fight. Most often in nature, such fights occur because of prey. It is difficult to predict their outcome. The explosive rage of the tiger runs into the strength and endurance of the bear, which can fight for a long time. If the animals are about the same weight, then it happens that they both die. Very interesting information about tigers was told by Vladimir Medvedev, one of the few photographers who managed to photograph a giant cat in nature several times. The artist met Vladimir during a trip to the Lazovsky Nature Reserve, and the photographer told a lot about his encounters with tigers, including how a tigress attacked him during a video shoot. Such impressions of eyewitnesses are as important for any artist as their own, recorded in field sketches and sketches. In particular, the painting “Taiga Distances” is based on watercolors painted by Vadim in the valley of the Perekatnaya River, just in those places where Vladimir Medvedev managed to photograph tigers, and where a tigress rushed at him. Fortunately, the attack was only a demonstration of force, and for the operator, “armed” only with a video camera, everything ended safely. 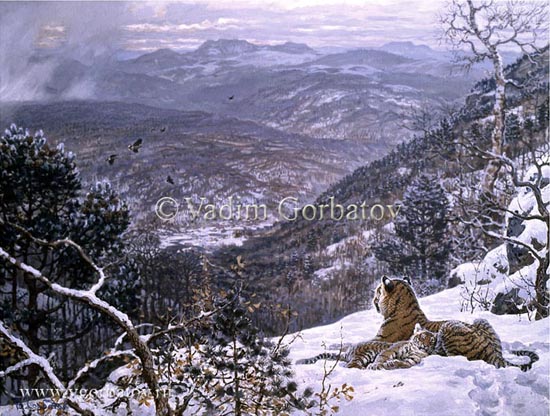 The artist did not have a chance to see the Amur tiger in nature, but he watched the Indian tigers well and for a long time in the Bandagar reserve, making sketches of these cats from nature. And once a tiger attacked an elephant, on which the artist was riding through the jungle… Some of his works on Indian tigers can be seen in the gallery.

Returning to the picture “The fight of a tiger with a bear-bear”. We have counted the number of surviving sketches, sketches and sketches for this picture (or as the artist himself says – handwriting). And it turned out that about a hundred of them were made! 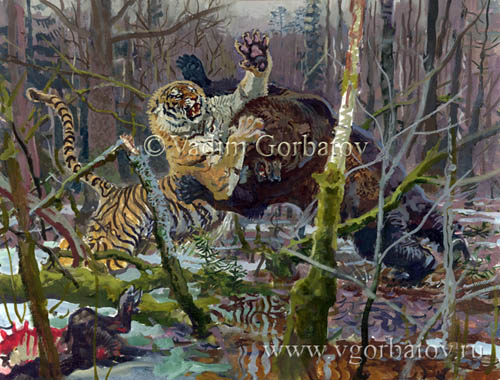 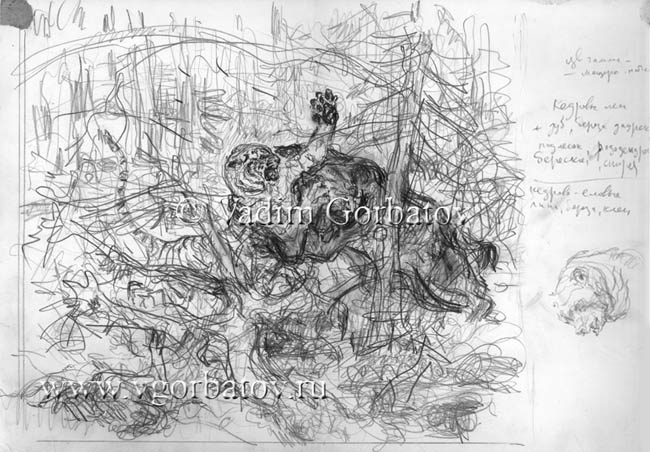 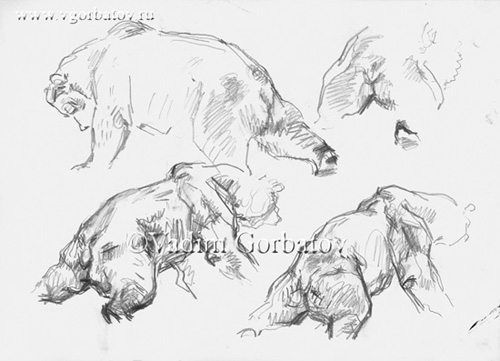 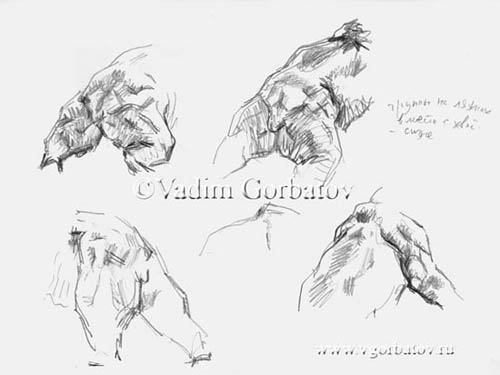 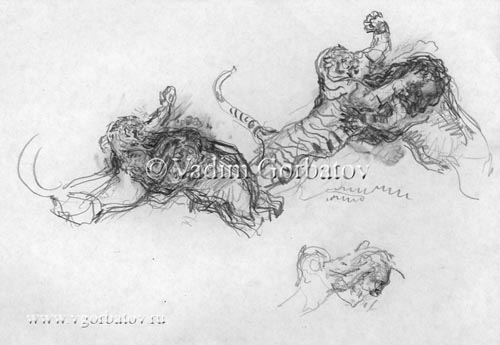 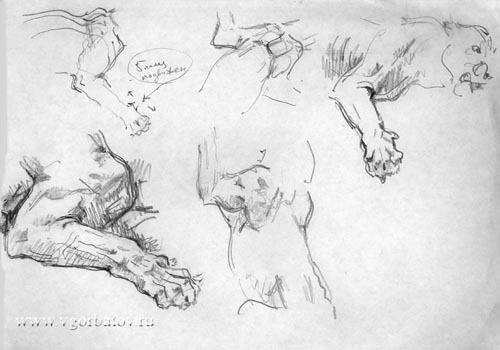 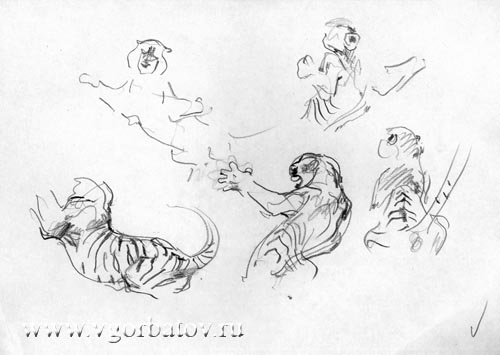 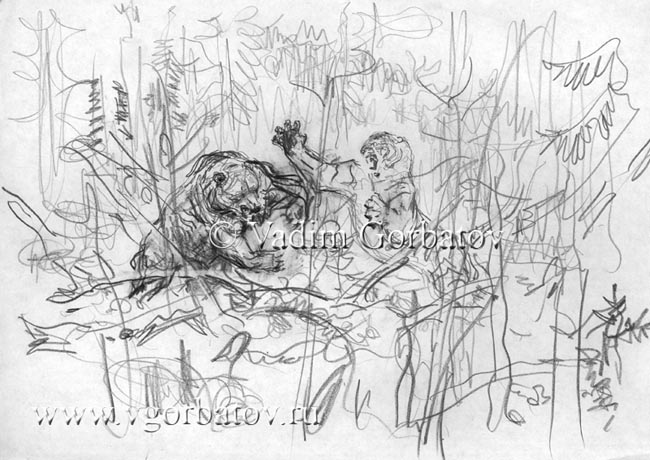 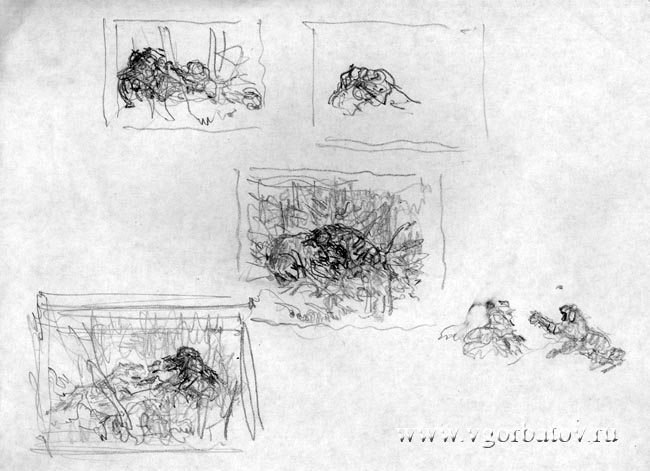 At the end of last year, the layout of the book “My life in the forest and at home”by his good friend, a well-known expert on bears, Valentin Sergeevich Pazhetnov, was completed. This book has already been published, but, unfortunately, in a tiny edition. And now several enthusiasts have decided to reissue it. The layout took place directly in the artist’s studio and with his direct participation. The book will contain a lot of drawings by Vadim Gorbatov, and photos taken at the Clean Forest biostation, where Valentin Sergeevich still lives, works and raises orphaned cubs.

Dear guests of the site, anticipating questions about where it will be possible to buy this book, we can only say – in all probability, it will not be sold. Its circulation is small and all copies will be distributed to relatives, friends and colleagues. We also do not distribute this book.

Work continues on the paintings, based on sketches and sketches made in September during a trip to Sark Island, as part of a project organized by the ANF Foundation (Artists for Wildlife). 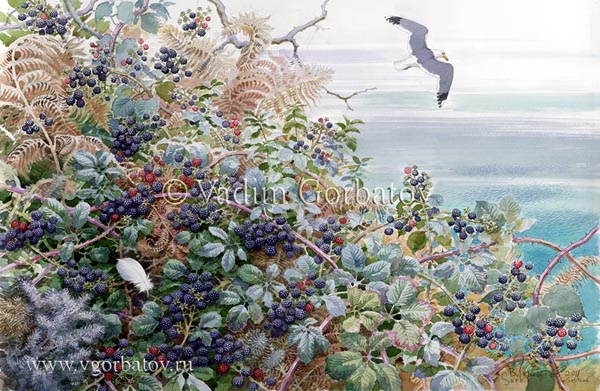 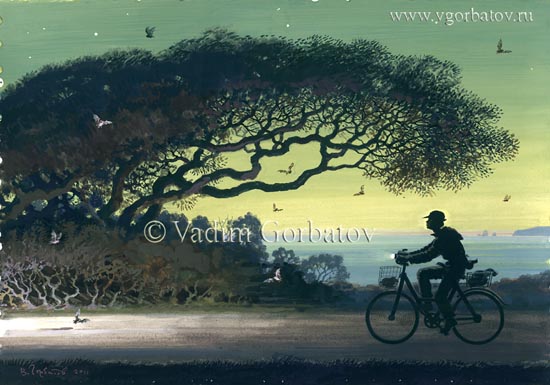