Dear guests, thank you for your feedback!

When we created this site, we did not expect that the work of Vadim Gorbatov would arouse such interest. After all, letters come not only from different parts of our country, but from the USA, England and even Brazil! And many reviews of the artist’s paintings (including critical ones) are so interesting that we decided to put them on the site. After all, sensible comments made by professionals: scientists, photographers, hunters are interesting not only to the artist, but also to all lovers of wildlife. To save space, we do not give here the kind words that you write to the artist, only specific comments and observations that may be interesting for many. I would also like to say that the artist reads all your letters, but can’t answer all of them.

Here is what the photographer and cameraman Vladimir Medvedev (who shot the Amur tiger and the Far Eastern leopard in nature) wrote about the drawing by Vadim Gorbatov, made for the photographer’s article about shooting a tiger. The picture shows the real moment of the tigress’s attack on the operator.

“Vadim, hello!.. A small observation. During aggression and attack, the tiger’s pupils are maximally open. Not much is known about this, but it is true. This is probably due to the fact that during the attack on a person, the tiger faces its deadly enemy. In a normal situation (a chance encounter), a tiger does not feel particularly dangerous in front of people, but during a direct collision (hunting a tiger, protecting tiger cubs) he undoubtedly feels a sense of fear, just like a person. I think the phrase “fear has big eyes” is just right here. If we try to explain this phenomenon from the point of view of physiology, it seems to me that this is due to a huge release of adrenaline. After all, even a person with acute pain and fear has dilated pupils. But since tigers have an incredible instant reaction, these processes occur very quickly in them. At the same time, I believe that they see everything normally. 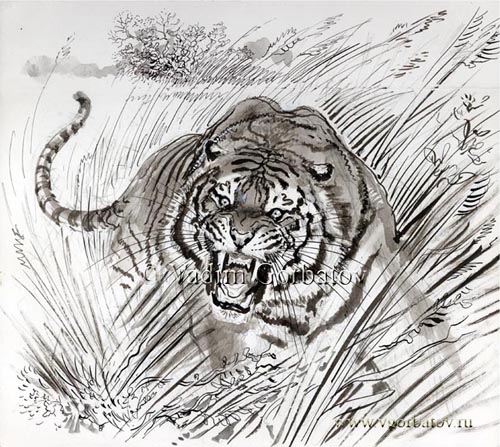 As a rule, tigers attack their prey from behind or from the side. That is, they attack from such a position that the victim did not see the danger until the last, and she did not have a chance to escape. In my case, the tiger came out openly into direct contact. I saw him, he saw me. We looked at each other for a while. And the tiger, or rather the tigress, rushed at me. But I stood still, which the tigress did not expect. The “victim” does not run away – the behavior is unusual. The stereotype at the subconscious level was destroyed. And the attack was conditional. If I turned my back and ran, the predator would definitely be on top of me. And in my case, the tigress could not perceive me as a victim. However, there were cases when I had to turn around and run. This applies to meetings with bears. If the bear went on the attack, then no tricks help here.”

And this is a letter from Fyodor Isakov, a hunting expert from Sakhalin.

“Dear Vadim Alekseevich, two of your paintings – “The Hunter with huskies” and the drawing for the book by V. Pazhetnov, depict hunters moving on skis.

When traveling on hunting skis, do not lift the walking foot from the snow. If you take your foot off the snow like that, then almost immediately you will fall on your back. When you step, you just push the walking foot forward, and if the ski is made correctly, it is selected on the surface. If it is wrong, then the snow is rowing on itself (this is at the factory, with a round bend). The looser the snow, the shorter the step. And only the tips of the socks are visible above the surface. Two people, besides me, looked at your website (both are engaged in commercial hunting) and also paid attention to it.” 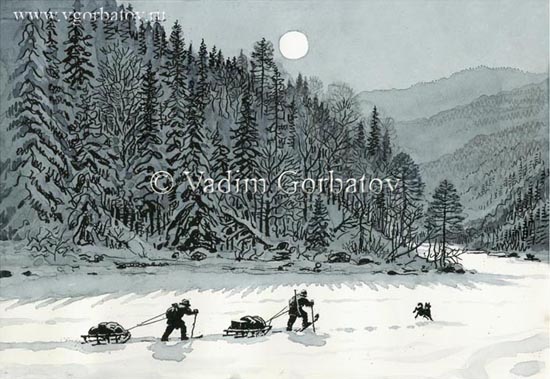 One of the new works dedicated to the island of Sark.

Vadim Gorbatov continues to work on a series of paintings dedicated to this small island, where he was in September with a group of artists, on a project organized by the Dutch ANF foundation. Two pairs of peregrine falcons nest on the island. The artist depicted this small island from the height of a falcon’s flight.