This is a fantastic picture, and in my opinion it shows Vadim Gorbatov’s wonderful ability to capture the atmosphere and the detail. Vadim told me that much of the technical detail was gleaned from library books and the most valuable information came from books about old Chinese art, scrolls, screens and paintings on silk.

One of the most difficult tasks for him was to imagine the design of the “Grand Pavilion” carried by four elephants. Marco Polo wrote about it, but only to say it was very comfortable and beautifully decorated with gold and had lion and tiger skins draped about.

The old European books usually depict it as a very funny big wooden box or like a tower on the elephants back.

Vadim felt it was movable and flexible in construction, tied with ropes and leather straps which it hung on wooden beams. For the shape of the pavilion he used the design from old Chinese Garden architecture. 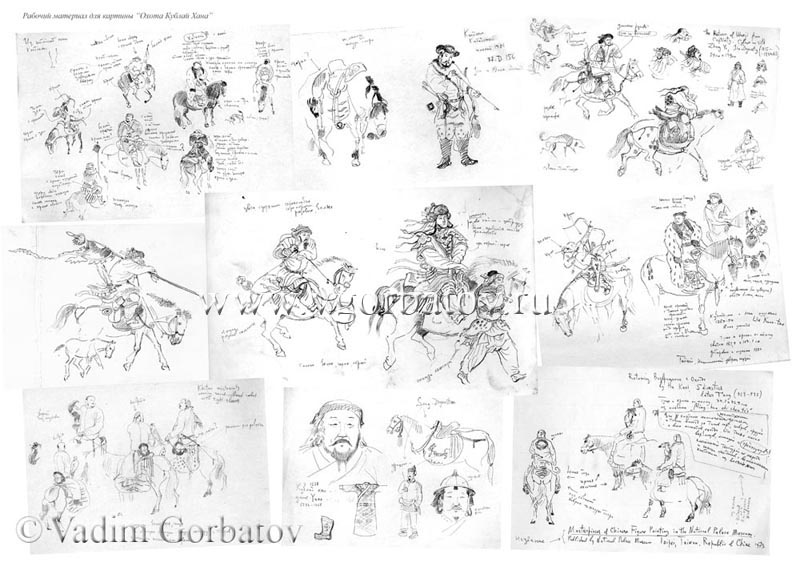 Vadim gave me some text written by Ernst Luttger, the owner of the original painting. I quote here from Ernst’s text;

“Marco Polo, the 13th. Century merchant, gave several noteworthy accounts of hunting and falconry in the Far East and it was largely due to his detailed descriptions under the title ”Plain Bargu” that we are able to research Kublai Khan’s hunting trip, and then accurately re-create the event on canvas.

Falconry flourished in Asia during this period and Kublai Khan left Cambaluc (Beijing) each March and travelled north east to go hunting accompanied by some 10,000 falconers and bird catchers as well as his soldiers, office bearer, bodyguards etc. numbering many thousands more.

The painting by Vadim Gorbatov shows Kublai Khan riding in his grand pavilion, which in turn is carried by four elephants. The Venetian traveller describes the pavilion as being provided with gold braid cloth on the inside and the outside as being covered with tiger skins. The Emperor, shown wearing a hermelin coat, travelled and hunted from his pavilion with a group of his favoured noblemen for diversion and good company. His favourite wives and his twelve best gyrfalcons were also present in then pavilion. 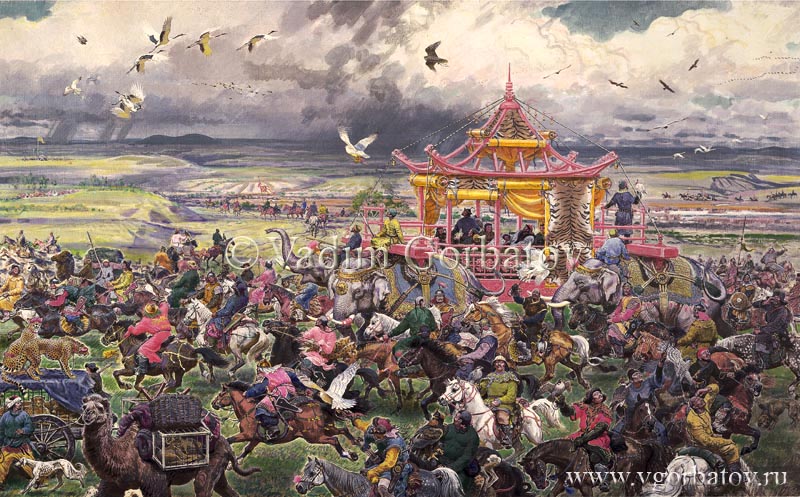 Marco Polo states that the Great Khan’s 10,000 falconers were divided into groups of between one hundred and two hundred people and you can see other groups hunting in the distance. Closer into the foreground on the left, the hooded cheetahs show two different methods of being secured when not actively coursing their prey. A camel is shown transporting trained caracals in its panniers and Tasy dogs are first described here as an ancient form of Saluki and were normally included in hunting groups.

In front of the pavilion., the painting shows three kinds of horses, which are known to have been used by these horse dependant people, the Akhal Tekin, Mongolian and Arab. On the right hand side of the painting there is a typical Mongol nobleman with his peregrine falcon and a Chinese falconer with a saker falcon, both watching birds that are outside of the picture.

A Chinese falconer with his golden eagle transports his kill, a deer on the back of his horse and quite close to him ride falconers with the light coloured Albidus or Buteoides goshawks. Kites follow the hunting groups to feed on the rubbish that they leave behind while flocks of waterfowl are also on the wing from the near sky and into the horizon, offering the possibility of sport to the Kublai Khan’s hunting parties.

Within the group of tents in the distance there is one flying a large flag. Marco Polo described this tent as a “lost property office” and should a person find any object but fail to report it here, he was considered a thief and punished accordingly if caught. Finally, at the centre bottom a falconer casts off a superb white gyrfalcon to join the other falcons already taking part in the hunt.»