Spotlight on the artist Vadim Gorbatov 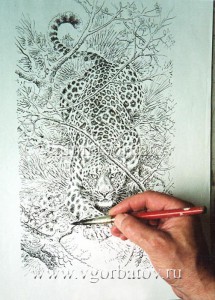 Seventeen years ago a group of falconers took a break from aviary building work under the sun of a hot Bavarian summer to look at a casually unrolled watercolour. All were eagle enthusiasts and the picture of a wolf and eagle doing battle couldn’t have more impact had the combatants come fighting and tumbling from the paper. This was my introduction to the work of Russian artist Vadim Gorbatov.

Born in Moscow in 1940, Vadim’s career as an artist began with him studying at the Academy of Art, Industrial Design and Applied Art in Moscow.  He went on to work as illustrator for Soviet television, gaining the position of head of graphics and illustration. He became a freelance artist in the mid 1980’s. His work has appeared in numerous books and periodicals, and he has had exhibitions in The Netherlands, France, the UK, and North America.

While Vadim’s work spans many topics, his fascination for birds of prey and falconry is obvious. It has its roots in his childhood. As a youngster, he would keenly seek out the raptors within striking distance of his home, avidly following their behaviour. He even kept hawks, but having no experienced hand to guide him, never took the step to true falconry.

This attraction to birds of prey and falconry, and Vadim’s practice of painting from life, resulted in much travelling, with expeditions to the far north and right across central Asia. They were trips into a treasure-trove: a secret world of ancient traditions, locked away places and only imagined and dreamt about hawking.

The images that came from these expeditions captured fascinating things: landscapes, training methods, and the different peoples involved. Examine the work, everything is there, every weatherworn face, every gnarled hand and every minutely detailed item of clothing and equipment. It was this detail – only available to someone who had seen it first hand that gave that early work a true feeling of the distant and unknown. It should be remembered that while much of this mystery might now have been lost, reports and features having made Asian falconry quite familiar, at that time, even an accurate sketch of a pair of Kazakh eagle jesses or a hood, was something for the European falconer to wonder over.

Very noticeable looking at Vadim’s pictures, is the strong influence of the traditional. This is a man deeply interested in history — especially that of his homeland — and this flows over into his creations. His work gives us falconry that is immediately more captivating than any modern mechanised version can ever be. And the birds of his falconry, the historical greats — gos, gyr, saker, peregrine, golden eagle — are somehow made to shine far brighter than any Harris’ or hybrid ever could. It makes no difference how spectacular and successful modern falconry is, in Vadim’s work, historical falconry wins.

Immediately to mind comes his latest calendar, a piece of art bursting with images from the past. Whether your eye is drawn by the medieval lady carrying a merlin (and being courted, it seems, by a suitor), or the mounted Asian warrior with gos and sight-hound, the leaves peel back revealing historical scene after historical scene.

Perhaps his most impressive piece of work is his interpretation of Marco Polo’s description of Kubilai Khan’s huge hawking excursions. Polo talked of thousands of falconers, countless hawks, falcons and eagles, and of the Great Khan overseeing operations from a mobile camp atop four elephants. Another artist might have diluted this fantastic scene — brought it almost into the realms of normality — not Vadim. We get the full, incredible, belief-testing version. It’s monumental falconry, a gigantic travelling extravaganza. This picture is so crammed with finely depicted activity, you could study it for a week and still not fully discover all it’s little gifts.

This is Vadim’s work at its best, this is his ability to story tell with a brush really expressing itself. Such paintings are pieces of theatre, are scenes truly happening, and you are transported there. I felt it that hot Bavarian day when I viewed that eagle and wolf picture. Suddenly I was on some snowy waste, could feel the cold and the biting wind, could see the wolf churning up the snow as it fought to free itself from the eagle’s deadly grip, and in the corner of my left eye, an eye squinting against the elements from under Balaclava-like head gear, I could see a desperate horseman racing to help, the pounding growing louder and louder as he drew near. Then I blinked and it was all gone — Russian Magic.